John ap John was born about 1625 at a freehold- property called Pen y Cefn. (Please note that this is not to be confused with the villages of Pen y Cefn). Although we cannot be certain of its precise location, this property was probably situated in township of Cristionydd Kenrick which belonged to the parish of Ruabon and County of Denbighshire.

John AP John was not rich, by English standards, nevertheless he was landowner and a member of the Welsh Gentry. He was probably educated at a school in Wrexham, where it is thought that he met Morgan Llwyd for they both and fell under the influenced of arch-puritan Walter Craddock. He was a Welsh speaker who held an amazing influence over his fellow country-men. John AP John was also fluent in English and knew a little of the French language.

During the Civil War he served alongside Vavasor Powell, the Radical Puritan and Fifth Monarchist, for both were Army Chaplains to a Parliamentary Garrison stationed at Beaumaris, Anglesey.

After the Civil War; John AP John joined Morgan Llwyd’s Independent Church at Wrexham where he quickly became a leading member and traveling-preacher. Due to his association with Vavasor Powell, John ap John became a committed Fifth Monarchist and his name appears among the signatories of a letter addressed to Oliver Cromwell.

In 1653 John AP John met George Fox, Founder of the Society of Friends, at his headquarters at Swarthmore Hall, Lancashire. According to Fox, it was here that he was convinced of the Truth. On returning home, later that year, John ap John established a Quaker Meeting at Pen y Cefn. This was the first Quaker Meeting ever held in Wales.

He travelled throughout Wales preaching the Quaker Message and among his most notable converts were the Lloyd family of Dolobran. This family of iron makers later became world famous Bankers and today their name can be seen on most UK High Streets. The Lloyds Bank.

John AP John was the very first Welsh Quaker and due to the success of his missionary work he is often referred to as The First Apostle of Quakerism in Wales.

In 1657 John AP John accompanied George Fox on his first ever tour of Wales. The Tour terminated at Pen y Cefn where, according to Fox, very next the next day, a glorious meeting was held.

Because his religious beliefs were, at that time, contrary to the law John AP John was incarcerated in a number of Welsh Gaols and was a prisoner for long periods of his life. His friend and fellow missionary, Richard Davies of Welshpool, claims that John ap John was first gaoled in ‘1653 or 1654’. If this is so, he was probably the first Welsh Quaker to be gaoled for his beliefs.

Following the Restoration, Welsh Quakers were, if anything, more severely persecuted than before. And as a consequence of this, in 1682, John AP John led a small delegation of Welsh Quakers and met with William Penn at London. During the discussions John AP John persuaded Penn, an English Nobleman, to allocate 30,000 acres of his American Territory to Welsh Quakers. Seven self-contained Companies were set up for the distribution of this land and Company Four was recorded as ‘John AP John of Ruabon and Thomas Wynn of Flintshire’. Through this company they purchased 5,000 acres of Pennsylvania for an initial payment of £100.

In the months that followed there was a mass exodus of Welsh Quakers. Although there are no official emigration figures for this period, it is estimated that during 1681 and 1682 about 2,000 Welsh Quakers left their homeland and embarked on a new life in America. A good many of these were members of the Welsh Gentry, many of whom had been influenced by John AP John.

Why then do we know so little about this very important religious pioneer?

We currently have little knowledge of John Ap John’s ancestry and this, to some extent, is the fault of the Welsh system of naming. For at that time, the Welsh had not completely adopted the English system of surnames. Consequently, the identity of individuals with popular names, like John ap John, are lost amidst the profusion.

The seventeenth century was a turbulent period with a raging Civil War. This bitter conflict split families, divided the country, and ultimately brought about the public execution of the King of England. During this period England became a Republic for the very first time in her history.

Later, following the passing of An Act for the Better Propagation of the Gospel in Wales, the government of Wales was for a while in the hands of a small group of religious fanatics who slung out all the Bishops and sacked most of the Welsh Clergy. Little wonder then that the Community Records of this period are often found to be wanting.

As previously sated, John Ap John’s ancestral home was a freehold property called Pen y Cefn. Although it is generally accepted that this property was situated in the Parish of Ruabon and County of Denbighshire there is disagreement among Historians as to which township it was in.

A.N. Palmer; Charles H Browning; and others maintain that John Ap John was of Trefor Issa, a township in the Parish of Llangollen. Whereas, Richard C Allen; The Rev. Shankland; T Mardy Rees and Local historian Dennis Davies are equally certain that Pen y Cefn belonged to the township of Coed Cristionydd. While Dr. E K Jones and others claim that this property was situated in the township of Cristionydd Kenrick. 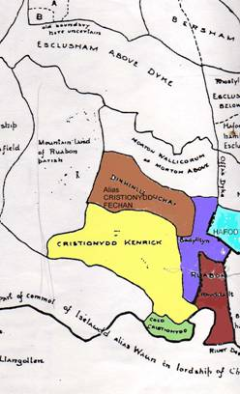 The contemporary sources used in this investigation are quite vague as to the whereabouts of Pen y Cefn; George Fox says that it was situated some 6 miles from Wrexham, while Richard Davies says only that it was near Wrexham.

Details of these now long forgotten townships can be found in Cefn Map which shows some the township belonging to The Lordship of Bromfield.

An extensive search of the local archives yielded only one Document which mentions the Pen y Cefn property. This is an Indenture dated 1713 which is held at the Shropshire Records Office (Ref. 3890/2/2/45) as part of the Mostyn Owen Collection. In this Document it states that a property ‘commonly called or known by the name of Peny y Kefn was situate in Cristionydd Kenrick’.

Please note that the three townships of Trefor Issa, Coed Cristionydd, Cristionydd Kenrick are centered around Trefynant Brook and the township of Rhyddallt is adjacent, townships are areas that have inhabitancy, at that time although the number of people could be quite small by today’s standards. These areas can be found at Cefn Mawr today and Trefynant Brook still runs through the valley where it once powered two corn mills on its way to the River Dee.

In 1663 John AP John married Kathryn Edwards, a financially secure widow, and for a while these newly weds probably took benefit from their combined properties. For although John Ap John held possession of his Pen y Cefn Estate until 1692 when it was sold to Sir Richard Myddleton of Chirk Castle, it is suggested that they may also have lived, albeit for a short period, with his wife at Kathryn’s first husband’s home. This property is known as Plas Ifan. Other evidence suggests that they did not hold this property for long. For on the death of her father, Edward Ap Randle of Ruabon, Kathryn Edwards, in spite of having five sisters, became the sole inheritor of his Tyddyn yr Rhyddallt Estate. She probably achieved this by buying-out the interests of her sisters using monies raised from the sale of her late husband’s estate.

As a consequence of this, this property then passed to Kathryn’s only child from her first marriage, her son and heir apparent Richard Davies, on his coming of age in 1681. He then married Anne Barnes of Warrington and afterwards these newlyweds took up their residency of the Tyddyn yr Rhyddallt Estate. John ap John and Kathryn at this time presumably removed back to his Pen y Cefn Estate (please note this is not the Richard Davies mentioned earlier).

John ap John and Kathryn together had only one child a daughter called Phoebe who assumed the name Jones. In 1689, she married John Mellor of Whitehough, Ipstones, in the County of Staffordshire.

In 1692, John ap John was ageing fast and as a consequence sold his Pen y Cefn Estate to Sir Richard Myddleton of Chirk Castle and until the mortgage was redeemed in 1714 the annual interest of £12 was paid first to himself then after hid death to his daughter, Phoebe Mellor.

In 1694 Kathryn Edwards died at Tyddyn y Rhyddallt, the home of her son Richard Davies.

In 1697, John Ap John died at the home of his son in law John Mellor and was buried in an unmarked Quaker Burial Ground at nearby Basford Hall.

In 1713, the property and lands of the former Pen y Cefn Estate were in the possession William Mostyn of Plaskynaston and were leased to a certain Richard Piers of Ruabon.

Please note Rhyddallt (sometimes spelt Rhuddallt) was one the ancient townships belonging to the parish of Ruabon. It extended from about James's Farm near Ruabon to the Dee and was approx a half mile wide. It is coloured dark brown on the map.

John ap John and Early Records of Friends in Wales