Cefn Mawr and Surrounding Villages of the Cefn

Cefn Mawr and the Surrounding Villages of Cefn as they are today were borne out of the Industrial Revolutions. The sub menu to the left of this text will take you to the various pages for each, but all are centred on and connected historically by both the Aqueduct and the Viaduct with Cefn Mawr at the centre.

A brief explanation of the history of Cefn Mawr and Surrounding Villages of Cefn may be worth while considering. Before the first Industrial Revolution, and the age of the canals, there was very little infrastructure in this area, consisting of the commons of Cefn, Cefn Bychan, Rhosymedre and the Plas Kynaston Estate, the total population at that time would have been no more than a couple of hundred, and the lively hoods for most were farming, croffting, limited quarrying and mining and a couple of small iron forges.  The nearest villages at that time would have been Ruabon and Llangollen, and the area was split between these two parishes.

Then in 1792, plans were first drawn up to link the River Seven at Shrewsbury to the River Dee at Chester and the River Mersey at what would later become known as Ellesmere Port, with the proposed Ellesmere Canal. Plans where changed and revised to enable the best transport route to be established to extract the mineral resources that the areas of Wrexham and Ruabon were rich in, Coal, Iron Ore, Lime Stone, Sand Stone and Slate. This was the economic driving force behind the coming of the canal and the construction of the Pontcysyllte Aqueduct.

The construction of the aqueduct was started in 1795 with the intention of the canal continuing to Chester via the rich Ruabon, Bersham and Wrexham Coal Fields. However in 1800 after the stone piers for the Pontcysyllte Aqueduct had been erected there was yet another change of plan, the canal would then be terminated at Trevor. This lead William Jessop, Thomas Telford’s boss to draw up his 1803 proposals for linking in local industry to the Trevor Basin and the construction of the Llangollen Canal for a water feeder. The Pontcysyllte Aqueduct was finished in 1805, and the Llangollen feeder in 1808, and in the intervening years water was supplied from Trefynant brook.

The arrival of the canal, in an area rich in minerals, caused local industry to take off and the original work force that had come to the area for the construction of the aqueduct were supplemented by further migrations of people to work in the pits and quarries that where sunk in the area, and at the expanding iron works such Plas Kynaston Iron Foundry, Blast Furnace and other forges of the area.

Then in 1846 the mighty Cefn Viaduct was built by Thomas Brassey and this ushered in the second industrial revolution, the Age of the Steam Railway Engine and another major transport route to Cefn Mawr and Surrounding Villages. During this era in the  1840’s New British Iron Works became the dominant iron producer in the area at Acrefair and more than 5000 people were living and working in the area. The different names of the villages had become established, although all relatively close to one another, and centred on Cefn Mawr lying between the Pontcysyllte Aqueduct and Cefn Viaduct in the Cefn.

However, all of this was long time ago, and many industries have come and gone in the area. So to see what our community looks like today, please take your time to look around this web site and then come and visit us. We are looking forward to meeting you. 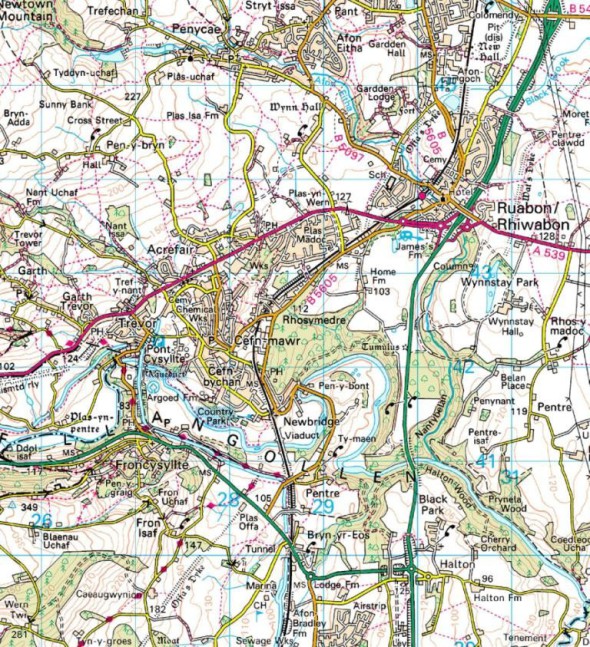