During the restoration of the Holly Bush Inn in 2013 to 2015 a Childs shoe was found hidden in the building. Concealed shoes have been discovered in many European countries, as well as in other parts of the world. Shoes are typically found in chimneys, under floors, above ceilings, around doors and windows, in the roof.

It is suggested that some may have been concealed as magical charms to protect the occupants of the building against evil influences such as demons, ghosts and witches. While others may have been intended to bestow fertility on a female member of the household, or been an offering to a household deity. A household deity is a spirit that protects the home, looking after the entire household or certain key members. It was a common belief in pagan religions as well as folklore across many parts of the world.

Deities are depicted in a variety of forms, but are also frequently expressed as having human form. Some faiths and traditions consider it blasphemous to imagine or depict the deity as having form. Deities are often thought to be immortal, and are commonly assumed to have personalities and to possess consciousness, intellects, desires, and emotions comparable but usually superior to those of humans. 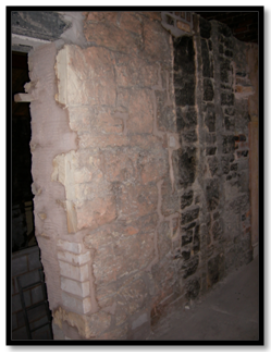 The shoe was found in the chimney breast of the old butchers when this was removed which was in a central internal position to the building. Here the discoloured stone work of the old chimney breast can be seen on the wall after removal of the chimney stack.  This would have once been a gable end to the old butchers when it was a separate building to the Holly Bush Inn, but over the years it became a part of the main building of the pub and the roof line changed at right angles to a long ridge line running parallel to Well Street. This is the second oldest part of the building.

Common to many shoes found are: 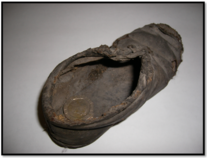 The Holly Bush Inn Shoe is now kept safely and carefully in our pub to continue to ward off any evil spirits or daemons while appeasing the Deity!

Interestingly while we were restoring the pub we also found a couple of other items, old horse tackle for the draymen and their horses, a “few old bottles”, not so surprising since the Holly Bush Inn has been a pub for over 200 years, and few old £20 notes!  So may be the old child’s shoe has brought us luck as well?

And a few of these turned up, the old D series £20 notes, folded up and pushed into mortar joints and behind plaster work. The notes were first printed in 1970 ceasing to be issued in 1991 and withdrawn from legal tender in 1993. This bank note introduced the new security measure of window threading in1984. These used to be a favourite in the brown paper wage packets in the 1970’s & 80’s. 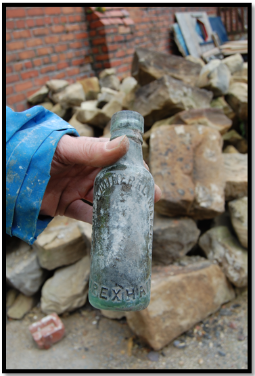